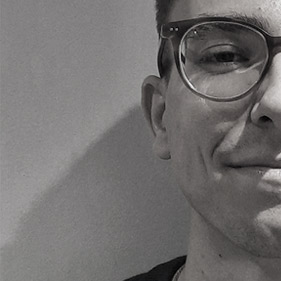 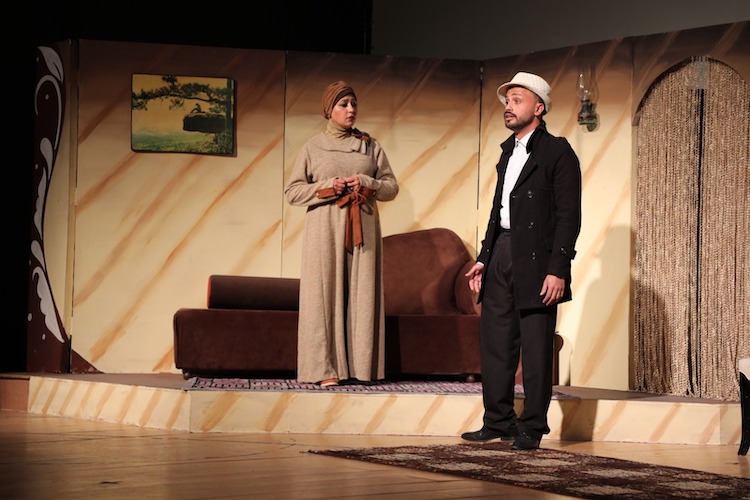 The room is wide and filled with sunlight from the ample glass windows. Several people are standing together, a few feet apart, declaiming in the elegant vibrations of Standard Arabic. Hisses and whistles, long and short vowels intermingle and produce powerful lyrical messages.

The melodic sounds fuse with the lazy rays of sunlight, just as the theatre actors and actresses melt with the characters they play. Arabic speakers themselves refer to their language as the most eloquent of tongues. And quite accurately, eloquence is one of the key skills in theatre acting.

But it was not just eloquence that got Reham Fathi Ibrahim Hamad into the theatre actress she is today. Hard work, perseverance and tenacity were also necessary to land her dream job. Determined to carve herself a space in Gaza’s theatre scene, Reham knows all too well the fruits of her relentless dedication: “I was able to achieve the beginning of my dream by standing firmly on a theatre stage and being well aware of every word I say or perform”.

And it was her strong-willed character that propelled her to seize the opportunity when it finally came in the form of UNESCO’s IFCD-funded project Empowering Gaza’s youth through theatre. Indeed, had it not been for this unique chance, she would have never come to the realization of where her true passion lays: in theatre acting.

“The training that I received from qualified trainers in the field of the theatre was the gateway that introduced me to the field of theatrical acting and a distinguished presence in the art scene in the Gaza Strip”, she asserts with enthusiasm. Reham was one of many candidates who applied and was successfully selected for the theatre training by the local NGO BASMA Society for Culture and Arts.

Under the aegis of UNESCO, the IFCD provided the necessary support for BASMA to become an inclusive venue where Gaza’s theatre artists could freely express themselves. At this NGO, Reham’s drive for theatre acting has flourished. As she puts it, “the development of my talent benefited greatly just as I benefited from getting to know the theatre director”.

The project that kickstarted Reham’s career as a theatre actress is just the tip of the iceberg. Indeed, the valuable lessons she learnt have become key assets in her endeavours to pave the way for other actresses in Palestine. She is open about how “the project was a golden opportunity to learn everything about theatre as well as develop my talent for theatre acting”.

Seeing that the project welcomed many students from local universities in the Gaza Strip, Reham gained precious insights from her peers and even built powerful friendship bonds with young fellow female actresses Asmaa Al-Feraá and Basima Masoud, which “continued after the project and until now”.

Moreover, the focus on young rising actors and actresses responded to a key goal of the project: to reinforce the Palestinian Youth Network (PYN). Indeed, the project enlarged the professional horizons of all the junior professionals participating in it. As Reham explains, “the UNESCO project came at an opportune time to fulfil the passion of many talented and ambitious people who have a dream and desire to work in theatrical art.”

And what is even more critical, these useful networking effects resonated beyond theatre and reached powerful stakeholders. Reham’s fame as Gaza’s rising theatre actress spread across the land, and when Palestine’s Minister of Culture Dr Atef Abu Seif congratulated her personally, she felt “proud that the UNESCO project, especially the play of the Doll’s House, had great success and great resonance in Gaza, the West Bank and abroad”.

Consequently, the role of theatre in communities, from offering a venue for freewheeling creativity to enabling the professional development of young creators has been reinforced, while access to such cultural expressions has been fostered.

By boldly addressing important societal issues that mattered to the local communities, “the project achieved a qualitative leap in the theatre works in the Gaza Strip”, Reham underlines. In this sense, the transformative impact of this project not just on Reham but on Gaza’s communities as well is a very powerful testimony of how the project’s goals were accomplished in overlapping complementarity.

Just as every other evening, Reham busies herself with cooking dinner for her husband and her four children. Preparing for her day starts the night before, and she toils to fulfil her family duties while striving to advance her career.

As the sky dresses up in its twilight cloak of dark sprinkles with glittering lights, Reham looks up at the twinkling stars, her eyes glaring with passion. Her ambition is to become “theatrical actress Number 1 in the Gaza Strip”, persuaded that she has “good talent and skill”. Above all, she confesses that she felt “this project is the right place”. With UNESCO’s spark igniting her passion, her rising star will shine brighter and shine on other yearning artists in Gaza and beyond.

**This article has been produced in the frame of the project Development of a communication strategy and the implementation plan as well as the strategy implementation services, for UNESCO. 13 human-impact articles were produced for dissemination on UNESCO’s website and social media. The stories highlight the projects implemented by UNESCO (including the International Fund for Cultural Diversity) and the impact achieved on the beneficiaries through an “IAI” approach, by focusing attention on Issue, Action and Impact. GlobalCAD directly tapped the beneficiaries based on contacts facilitated by UNESCO to obtain their testimonies and multimedia files related to the projects.*

Jorge joined GlobalCAD through the ICEX Scholarship Programme on Business Internationalisation and works as a technical and research assistant.