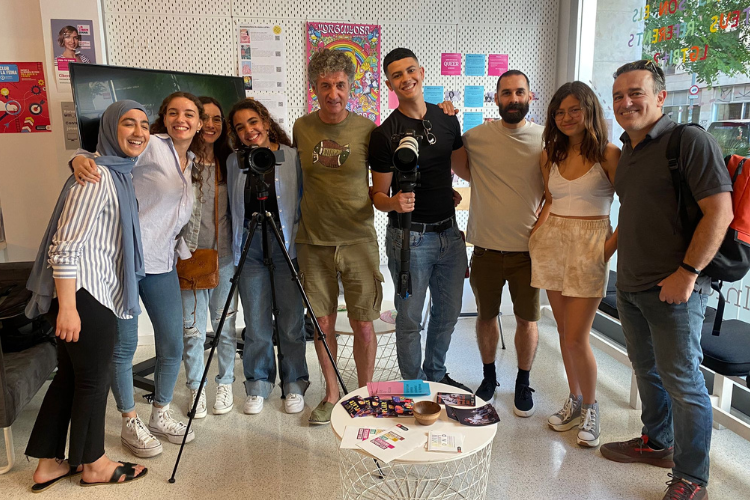 CAD Productions offers audiovisual training to people affected by racism or stigma of origin to stimulate their leadership in the field of education and social intervention. This training is given within the framework of the program “Young referents for diversity, interculturality and violence prevention”, of the Center for African and Intercultural Studies (CEAi).

The training consists of four weekly sessions of a theoretical-reflective nature and later the accompaniment during the creation of a short documentary.

During the month of May, a team of professionals from CAD Productions offered students theoretical and methodological tools on topics such as audiovisual pre-production, camera and editing, as well as practical references for the development of an audiovisual project.

As a result of this stage, the participants have generated their documentary project, which includes the creation of a conceptual briefing, the narrative script and the production plan. Likewise, they addressed the technical principles for conducting interviews, the audiovisual presentation of characters and, in general, the basic elements of narrative discourse.

Between the months of June and September, the participants of “Joves Referents” will work on the production and editing of the documentary, which will launch a humane and sensitive look at the daily life of people who are victims of racial prejudice. The resulting documentary will be presented at the Filmoteca de Catalunya in September this year.

The audiovisual as a source of plural narratives

Racial discrimination occurs when feelings of hatred develop towards another person or group of people due to certain qualities such as language or accent, skin color, customs or place of origin, among many others. Most of the time these feelings are based on ignorance or lack of information about these groups, which lead to reproducing generalizations or prejudices. The latter, in turn, has a negative impact on the lives of the victims, limiting their social projection and enjoyment of their rights, but also on the cohesion, equity and prosperity of the societies where it occurs.

In this context, audiovisual language has become a more essential means of expression to create diverse narratives that allow knowing the realities of social groups less represented in the media or public information.

The “Joves referents” program trains young people affected by racism or stigma of origin on issues of diversity, interculturality and violence prevention, so that they can act as agents of awareness. It also promotes the debate on current issues and draws up proposals for good practices to eradicate racism and stigma of origin and promote diversity in different areas of social life.