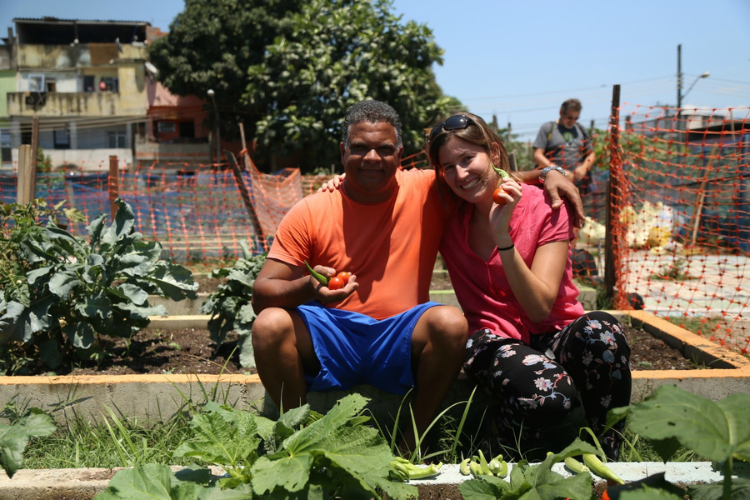 Research on communitarian urban agriculture explores its role as an alternative to make a different urban model come true, fostering a better environmental and social balance. Vegetable garden initiatives in public spaces can help expand the discussion about community actions, which tend to promote deep changes locally by making urban space management more democratic and signaling the transformation into an “edible city,” where food can actually be produced. This view has contributed to the increasing emergence of community gardens across the developed world, but also in developing economies.

This is the case, for instance, in Brazil, where many community gardens have been created in the past few years by communities themselves as an expression of activism aimed at transforming public spaces and the city.

Hortas Cariocas is a project financed by Rio de Janeiro’s Municipal Government. Its main objective is to encourage the creation of organic vegetable gardens in low-income communities and public schools as a way to generate access to healthy food and offer work and economic return to people involved.

Under this partnership with the Municipal Government, the neighbourhood receives the means to create a community garden (resources,  equipment, uniforms, seeds, etc.) and the gardeners receive a certain  stipend to encourage and help them dedicate their time to the project. The gardeners, on the other hand, must donate half of their total harvest to local public schools. The other half may be consumed, sold or donated by the  gardeners at their own  choice. After some time receiving the government’s subsidies, the  objective is that the  gardeners  could be  able to manage the garden on their own, in a self-sustainable way.

The  initiative is  responsible for setting up the biggest urban vegetable garden in Latin America. Located in the Complexo de Manguinhos, a low-income community of Rio de Janeiro, the garden has 1 kilometre in diameter, more than 300 seedbeds and employs dozens of people. Before being converted into this garden, the site was a garbage dump frequented by drug users.

Currently, the initiative already has 40 gardens distributed trough 8 different low-income communities of Rio de Janeiro. The objective is to keep expanding it towards other areas of the city with high rates of poverty and social exclusion. This initiative can be easily replicated by other local governments with a specialized staff to manage the project.

This is another initiative documented by Towards the Human City.