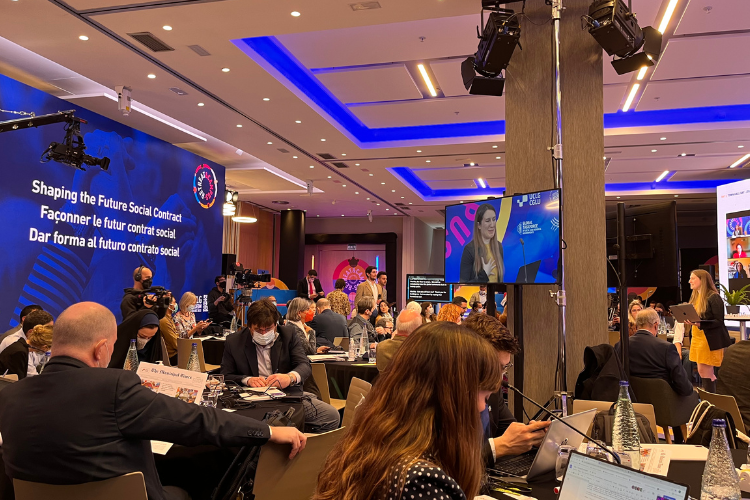 As a result, the UCLG members are developing a far-reaching Pact for the Future, articulated around three axes, People, Planet, and Government, that give shape to a new social contract within the framework of the SDGs.

To implement the Pact, UCLG is leading the consolidation of a strengthened partnership with the international community and the organization of civil society through the Town Halls.

The Town Halls create unique spaces for dialogue and interaction between internationally organized civil society constituencies and the political leadership of the local and regional governments’ constituency.

UCLG has engaged GlobalCAD to accompany the UCLG 2022 Town Hall process, providing support in the participatory process that will end with the publication of the Pact for the Future.

In that frame, GlobalCAD will support the identification of key strategic messages throughout the phases of the four Town Halls and their respective processes.

This will require an analysis of the conclusions of the UCLG meets as well as consultations with the main participants of every Town Hall to obtain the inputs and then translate them into strategic messages.

GlobalCAD consultants will also build a Communication strategy of the Town Hall ahead of the World Congress to define actions targeting specific audiences and ensure their engagement and participation in the process of the UCLG 7th World Congress and Summit of Local and Regional Leaders, to take place in Daejeon the next October.

In the frame of the same consultancy, GlobalCAD is coordinating the production of four policy papers for each one of the Town Hall themes, based on a consultation process.

To that end, the team is accompanying the leaders of each thematic group to present an outline and two consequent drafts that will be validated in a participatory manner before the final presentation during the Daejeon Summit.

GlobalCAD had previously coordinated the production of several policy papers for the 6th World Congress of United Cities and Local Governments (UCLG) and World Summit of Local and Regional Leaders that took place in Durban, South Africa in 2019. The papers tackle the subjects of Right to the City, Addressing Informality in Cities, Gender Equality and Women’s Empowerment, Inclusive and Accessible Cities and Sustainable Urban Development.

Finally, the consultants will produce two communication materials that will highlight some of the stories behind the Town Hall. The objective of these materials will be to contribute to the amplification of the Town Hall process’ impact and invigorate the narrative of the process. The consultants’ team is working together with the UCLG World Secretariat to identify, structure and translate those stories into compelling and attractive audiovisual materials.

The first story to be produced by CAD Productions is about the decentralized cooperation device activated after the triple disaster that hit the city of Palu, Indonesia, in 2018.

Palu City was struck by an earthquake with a magnitude of 7.4 on 28 September 2018. The city was the most affected area in the province as the earthquake triggered a tsunami and landslides causing widespread destruction and the loss of the lives of more than 4,000 people.

To tackle the crisis, the local movements started an unprecedented initiative of decentralized cooperation.

The call received positive responses from Cités Unies France (CUF) through fund collection to support the local government of Palu City (Indonesia) in their recovery from the earthquake, tsunami and liquefaction disasters that simultaneously occurred. The collected fund provided not only technical support but also the means for capacity building focusing on resilience and the effectiveness of an early warning system.

A CAD Productions team travelled to Palu at the end of May to gather evidence from the field as well as visual resources for the production of this success story.