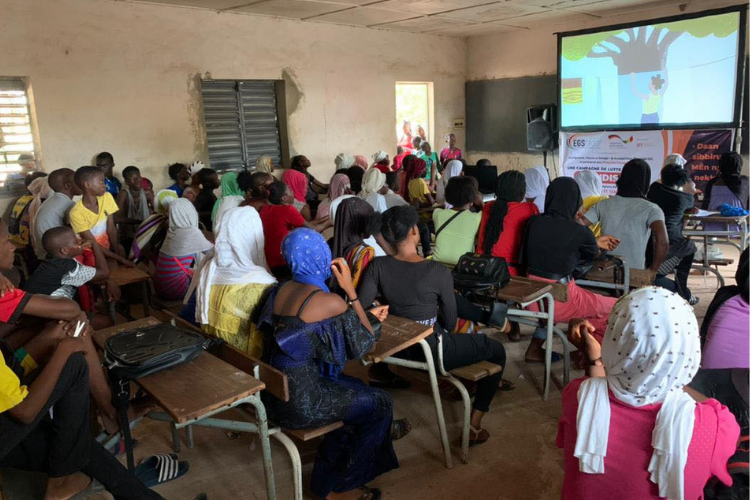 The reflection of the screen illuminates the faces of the inhabitants of the town of Makhana, on the outskirts of Saint-Louis. The light from the projector surprises those who are still at home, who rush out to see the film. A large cloth and two speakers decorate the town square tonight. The 80 people who occupy the place, however, little notice what surrounds them. They are already absorbed in the history that has come to life on the screen.

Behind the projector, Gnagna Ndiaye reviews some notes leaning on a motorized tricycle with a sign reading: “MobiCINÉ: the cinema near you”. This 34-year-old woman from Saint-Louis is the architect of the journey that has taken the big screen in a mobile unit to Makhana. She is accompanied by Khady, the communication manager of the project.

Figure 1: Gnagna and Khady set up a cinema room at the village of Makhana

They have had a busy day. In the morning they met at their office local in Saint-Louis to verify the material, to watch the movie one more time and prepare the discussion guide around the film. They arrived in Makhana on time to set up the outdoor room, install the equipment and prepare the projection.

On the paper, Gnagna has captured some ideas for the closing session of the screening. What does the story of the movie tell us? Why is irregular migration dangerous? Which alternatives are there for irregular migration? Throughout the story, the children of Makhana reflect on an issue that concerns everyone, but that is rarely openly tackled.

Figure 2: Ndeye Marianne Diop, director of the Cultural Center of Saint-Louis receives new equipment during the first phase of the project

Like Gnagna and her team in Makhana, many other MobiCINÉ units create spaces for reflection and cinematographic enjoyment in various regions of Senegal. The mission of this project is to bring the power of audiovisual narrative to neighborhoods and villages where cinema is a rare commodity.

“MobiCINÉ offers an innovative response to a great problem in Africa: the disappearance of cinemas and the great number of African films inaccessible to Africans,” says Babacar Sall, cultural manager and collaborator of the project.

Move so as not to die

It was Albert Einstein who wrote to his son Eduard in 1930: “Life is like riding a bicycle. To keep your balance, you must keep moving.” He was not referring to cinema, obviously, which was at the peak in those years. In the midst of a modernity articulated around mass culture, cinema at the time had its feet well planted.

In 2021, we are in a completely different context, where film consumption on the big screen is in the red for another year. Globally, the COVID-19 pandemic has only accelerated what already seemed like an announced death, attacking rooms already surrounded by streamingplatforms.

In Senegal, however, it did not take a pandemic or a technological revolution for the big cinemas to disappear. Piracy was the cause that between the beginning of the 1990s and 2020s, the cinemas of Dakar could be counted on one hand, despite Senegal being the cradle of award-winning and prestigious filmmakers. For this reason, the cinema in this African country had to ride on wheels to live through the towns and neighborhoods of the country.

Figure 3: MobiCINÉ Senegal transforms the access and distribution of films, shortening the value chain of the film industry.

MobiCINÉ was born ten years ago in Dakar with seven mobile projection units in cultural centers, schools and public spaces. In 2017, it was selected, among 227 other projects, as a beneficiary of UNESCO’s International Fund for Cultural Diversity (IFCD) for its innovative nature and its approach to a complex issue in the film industry such as distribution. This support allowed expanding the project “MobiCINE: Transforming film distribution and access” to other regions, where the demand for film projections had increased. Several mobile units were created as a result in Saint-Louis, Matam, Kédougou, Ziguinchor, Kaolack and Thiès, with a repertoire of more than 50 films, of which 87% were African.

Youssouf Diatta, MobiCINÉ collaborator and director of the Kédougou Regional Cultural Center at the time, explains how the project was very well received by local authorities, cultural actors and the general population: “It has contributed to democratize access to films in rural areas, empower young people to manage mobile film distribution units and create jobs.”

Thanks to the financial support from UNESCO, 60 entrepreneurs could be recruited to manage these units and trained in topics such as project management, fundraising, communication and mobile broadcast technologies.

Passionate about the performing arts, Gnagna has stepped on various African and European stages tables as a theater and film actress and also as a director’s assistant. Her dream was to manage a cultural company that would help mobilize the youth of her community and at the same time gain financial stability. At a meeting of the Regional Cultural Center of Saint-Louis, she heard about mobiCINÉ and after a ten-day training, she was appointed coordinator of the project in the Saint-Louis region. “The project has allowed me to evolve in the cinematographic medium while making a living, since it gives me and my team a stable income,” says Gnagna.

Like her, various cultural professionals have found new socio-economic opportunities. ” The antennas have created numerous jobs, thus improving the daily lives of the participants and their families. Those who have been trained and were supported as part of MobiCINÉ have managed to strengthen their activities and develop their personal projects,” says Rokhaya Daba Sarr, director of the renowned Africa Fête festival and trainer of the project.

Boucounta Mbaye, regional coordinator of the project in Thiès, dreams of extending the project to the rest of Senegal’s regions and expanding it with similar mobile theater units. “My mother kept asking me to take her to a movie theater in Dakar that had almost disappeared. Since I can organize the screenings in my neighborhood, she can watch the movies with her friends, and on top of that I save my gas money!” he affirms between laughs.

From a producer to a person in a Senegalese neighborhood, the path taken by a film product can be long and rugged. MobiCINÉ shortens the gap by strengthening the entire value chain of the film industry in Senegal. Its distribution system guarantees benefits to African copyright holders and producers, while restructuring a market deteriorated by the closure of cinemas.

In small groups, the people of Makhana return home, their emotions moved by the movie and today’s debate. Gnagna and Khady carefully store the equipment in the tricycle, with the help of the driver, and start their path towards Saint-Louis. Goodbyes are difficult; they already know. But like a part of them, the cinema does not return entirely on that tricycle: its seed germinates in the hearts of Makhana.

**This article has been produced in the frame of the project Development of a communication strategy and the implementation plan as well as the strategy implementation services, for UNESCO. 13 human-impact articles were produced for dissemination in UNESCO’s website and social media. The stories highlight the projects implemented by UNESCO (including the International Fund for Cultural Diversity) and the impact achieved on the beneficiaries through an “IAI” approach, by focusing attention on Issue, Action and Impact. GlobalCAD directly tapped the beneficiaries based on contacts facilitated by UNESCO to obtain their testimonies and multimedia files related to the projects.*