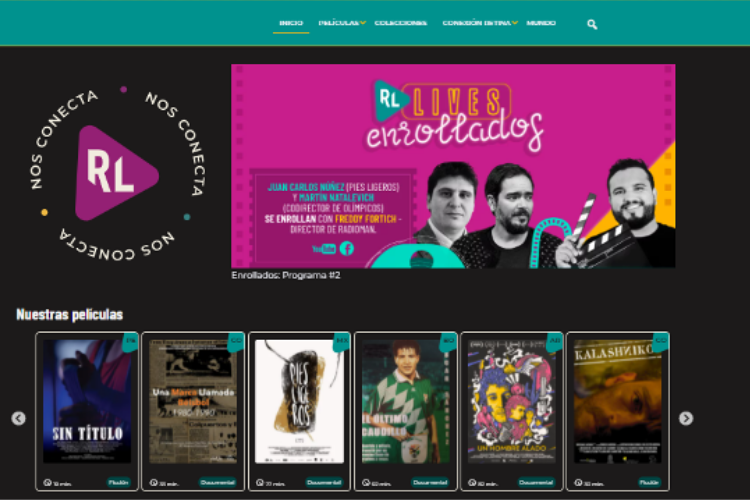 The power of cinema to touch human emotions is undeterred. Julio Lamaña, cultural manager and documentary maker, knows this very well. Passionate as he is about “the possibility to connect with other intelligences, other human universes”, he tied his career to cinema as an art “proposing (…) such existential possibility”. Quoting Chilean producer Ignacio Agüero, he underscores how cinema is about “the moment where the artwork and the public meet. That magic moment.”

Yet, cinema’s magic atmosphere that filmmakers endeavor to devise does not come without its hurdles. The industrious hands and minds behind the beautiful stories unfolding before our screen have usually undergone considerable hardship. Julio explains how “it is very important in a career as fragile as cinema production to keep the enthusiasm and the will to shoot ever alive”. Furthermore, he claims with the confidence of the seasoned professional that “not to give up on our work becomes a vital objective, the path to personal self-improvement”.

Consuelo Castillo, director of the Colombian Agency for the Promotion and Distribution of Cinema (DOC:CO), strongly agrees on the proverbial hardship of Latin American filmmaking. Driven by what she considers social justice, Consuelo strives to “bring the best out of every film, understand that every film has its own character (…)”. And to that goal, she acknowledges the “infinite willingness and resiliency allowing me to overcome all hurdles (…) and embrace it with firmness”.

Deeply concerned with the adversity faced by Latin American filmmakers, UNESCO rolled out extensive support through the International Fund for Cultural Diversity (IFCD) to the Ministry of Culture of Colombia and its counterparts in Peru, Ecuador, Mexico, Uruguay. Thus, the project contributed to shaping Retina Latina into the renowned cinema digital platform it is today, where audience from as far as Spain, the United States or Switzerland can enjoy genuine cinema art pieces from a vast array of Latin American producers for free.

The website display of Retina Latina, the digital platform to watch Latin American cinema that was supported by the IFCD

Indeed, outreach and dissemination of the artwork becomes crucial not only to maximize the impact upon the public, but also to keep the creative zeal alive and the artists’ impulse unrelenting. While mainstream films flood VOD (Video on Demand) platforms after being spotlighted by major international film festivals such as the Cannes, Venice, Mar de la Plata and Berlin, Julio highlights that Retina Latina breaks the mold by helping to improve access to a very impressive range of films that is very diverse.

Furthermore, Retina Latina made it possible to delve deeper into public policies for the cultural and creative industries, igniting the spark of change across the region. Consuelo explains how public policy supported the circulation of film production in Colombia. Specifically, the project CIRCULA directly targeted the promotion of better policies for the dissemination and circulation of Latin American cinema. Consuelo explains that “it aspired to weave a web of agents to support specific working objectives with regard to the exhibition of Latin American content”. “It was like finally giving a voice to many artwork pieces which had never ventured out of their creators’ homes”, she compellingly declares.

The transformative impact of the IFCD has also enhanced Retina Latina’s reach in a significant way. Julio explains how the IFCD funding crucially helped enlarge the networks available to the Latin American filmmaking industry and its main actors, from “the partnership between Retina Latina and the International Federation of Cinema Clubs” to “the direct streaming of the platform in the 8th Ibero-American Meeting of Cinema Clubs.”

The powerful effects on fostering the diversity of cultural expressions and supporting nascent filmmakers in these developing countries resonate across the industry and beyond. Julio expresses his satisfaction with how such diversity regarding film work “enables the configuration of a cultural and audiovisual community around Latin American cinema and its films”. Consuelo adds that Retina has become “a reliable and committed ally in the growth of the Latin American cinema sector”.

Consuelo Castillo, one of the beneficiaries of IFCD’s project supporting Retina Latina, in an interview with online content producer PRODU

With its digital imprint, Retina Latina has risen to become a global brand placing its bets on cultural rights to an unprecedented extent. The careful curating work is “very important and appealing”, Julio highlights, be it “by schools, genres, invited festivals, cycles by concepts, national celebrations, etc.”. And this is crucial to providing Latin American filmmakers a useful venue to promote their work, expand their audience and boost their income and professional stature.

Retina Latina has proven adaptable to all contexts thanks to its mobile phone format. Such has enhanced the dissemination and popularity of Latin American cinema, enabling rising producers to significantly amplify their outreach. Both Consuelo and Julio eagerly confirm the resounding impact of the mobile phone platform on the success of the project.

The vital goals of the IFCD’s vision for Retina Latina are realized, namely to position Latin American cinema globally and regionally and, deeply connected to the former, to promote regional integration facilitating partnerships through the platform. Without this metamorphosis, Latin American filmmakers would have remained in the dark anonymity that for long seemed their doom.

Instead, their film products are increasingly recognized not just for the sake of their cultural value, but the producers are reaping the due economic compensation for their work as well. Julio believes fervently in the support that Retina Latina provides to Latin American authors because “its existence allows us to be. And by being, we can keep up with our work, with renewed enthusiasm”.

When someone compared Retina Latina to a Latin American Netflix, Consuelo gleefully acknowledges that “we had done a good job”. Both Julio and Consuelo coincide in their future aspirations for Retina Latina: to keep up the good work, with governments and other stakeholders on board. In this way, Retina Latina will continue to be a powerful lens to open the world to the vibrant Latin American cinema production, just like the glass of the filming camera will continue to gather compelling stories of human impact.

**This article has been produced in the frame of the project Development of a communication strategy and the implementation plan as well as the strategy implementation services, for UNESCO. 13 human-impact articles were produced for dissemination in UNESCO’s website and social media. The stories highlight the projects implemented by UNESCO (including the International Fund for Cultural Diversity) and the impact achieved on the beneficiaries through an “IAI” approach, by focusing attention on Issue, Action and Impact. GlobalCAD directly tapped the beneficiaries based on contacts facilitated by UNESCO to obtain their testimonies and multimedia files related to the projects.*

For more information (in Spanish) about Retina Latina, the platform and the project, please visit: https://www.retinalatina.org/acerca-de-retina-latina/