Joves Referents: Spain needs to listen the voice of people with a migrant background 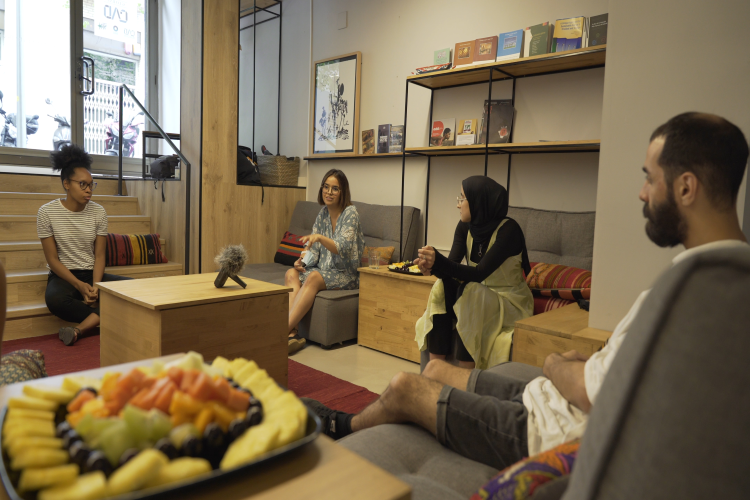 There are currently 7.74 million foreign-born people living in Spain, which represents 16% of the total population living in the country. However, 75% of migrants residing in Spain hold elementary and low-paid jobs, while the level of education of this population is very similar (23% of the Spanish population, and 21% of the Latin American population residing in Spain), as mentioned in the Caritas Spain study, Un arraigo sobre el alambre (A Rootedness on the Wire).

This situation mentioned above, as well as other important elements in terms of inclusion, was denounced by members of the group JOVES REFERENTS for diversity, interculturality and violence prevention, in a workshop held at GlobalCAD‘s offices recently. The young participants stressed that although there is a lot of talk about the inclusion of people with a migrant background, this does not translate into greater coexistence and equal opportunities. Indeed, the reality of first-generation Spaniards, who represent 17% of newborns in Spain, or of naturalised migrants, is rarely considered in analyses of integration. For this reason, the participants pointed out that “Spain needs above all to listen to these people, to understand their conditions and characteristics and to promote equal opportunities”.

The documentary aims to highlight the importance of migrant people and entrepreneurs in Spain as drivers of change and catalysts of economic growth through the generation of income and employment opportunities. In addition, the documentary also aims to deconstruct the stereotypes surrounding migrants that have recently become entrenched in Spain and other European Union countries through the rise of hate speech.

The documentary focuses mainly on migrants from African countries who are involved, in one way or another, in social entrepreneurship projects in Barcelona.  The documentary also includes personal stories of migrants who nurture the diversity of the Spanish population and foster wealth through the creation of new economic opportunities.

During the three-hour workshop, GlobalCAD consultants led the discussion on the challenges, barriers and difficulties faced by migrants and children of migrants in Spain on a daily basis. They also addressed how these challenges affect their integration and the cohesion of Spanish society, as well as the opportunities and benefits that these people generate in the host societies. Finally, some actions or lines of work were proposed to reverse the current narrative and transform it into a more humane one, which recognises the rights and positive role played by these people in Spain.

The project “Voices on the move: people with a migrant background creating more cohesive societies” began in May 2021 and will conclude at the end of July.

Joves Referents is a programme of the Centre d’Estudis Africans i Interculturals (CEAi)[1] that aims to promote the active participation of young people affected by racism or stigma of origin in the fields of education and social intervention, as well as in other areas where diversity is still an unresolved issue.

The main actions carried out by the programme are the following:

[1] Centre for African and Intercultural Studies