Tracing the route of minerals of the Information Age 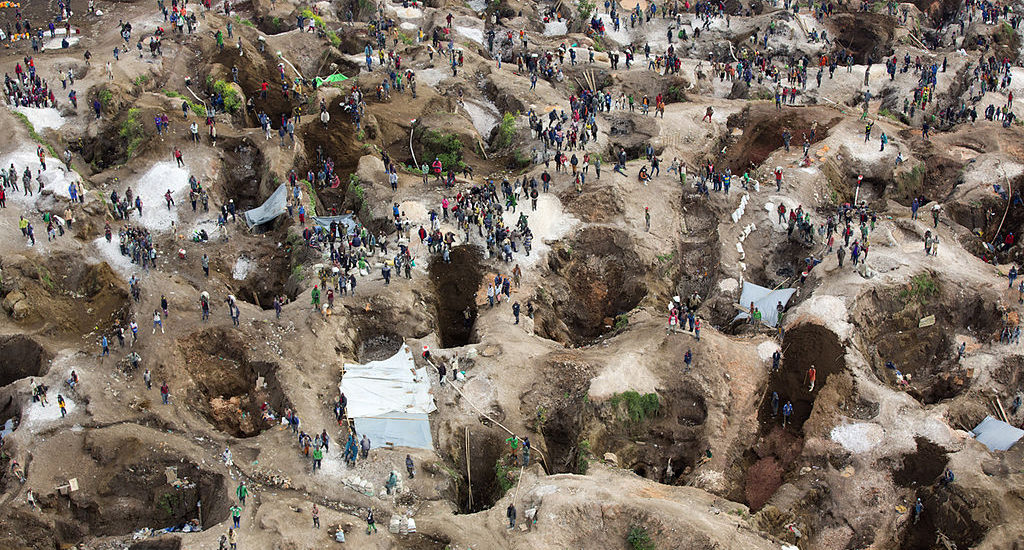 As the Nobel-laureated economist Milton Friedmann stated “There is not a single person in the world who could make this pencil. […] The wood from which it is made […] comes from the state of Washington. To cut down that tree, it took a saw. To make the saw, it took steel. To make the steel it took iron ore. […] Compressed graphite […] comes from some mines in South America”.

This statement describes the necessary cooperation required to produce a single pencil, but also the degree of complexity to which the globalized economy has arrived. According to the World Bank data, exports represent today a 30% of the total global GDP, against 13% in 1970.

International trade has an important impact the world economic growth and development as it helps countries economies to reduce their dependency on local markets, reducing the impact of market volatility, an increases the access  to  the  currencies,  which  increases  the national income, the turnover and the surpluses of the state. In fact, since 1961, global GDP has increase by a factor of 8.… But, despite the interesting and positive mechanisms that this process generates, some actors have also taken advantage of this complexity to exploit and extract or provide illicitly obtained resources.

Without going any further, one of the most common products of 21st century, the mobile phone, is made up of a series of mineral materials and components that come from different parts of the world. The most notable of these materials, and one that has created a certain stir among global citizens, is the Coltan imported from the Democratic Republic of Congo (DRC). DRC counts for 80% of the coltan reserves in the world.

DRC counts for 80% of the coltan reserves in the world. Photo: Responsible Sourcing Network on Flickr

Coltan is one of the commonly known as conflict minerals or 3TGs for cassiterite (for Tin), wolframite (for Tungsten), coltan (for Tantalum), and Gold. Conflict minerals are minerals extracted in conflict areas, the sale of which can contribute to the perpetuation of armed violence, instability, insecurity and associated human rights violations through the funding of armed groups.

Some of the most important reserves of these minerals are located in the eastern and south-eastern regions of DRC. A large part of them is extracted by local miners and armed groups who force those local miners (commonly known as Artisanal and Small-Scale Miners – ASM) to exploit the mines, smuggle and sell those minerals in Rwanda for financing their guerrilla.[1]

Rwanda is the first coltan producer/exporter in the world but has no reserves of this mineral. The high informality of the exploitation of these resources causes serious issues in term of human and children rights. In fact, according to the data provided by World Vision in 2013, 40% of the ASM workers in DRC were children, which corresponds to 200,000 child miners. According to the ILO, mining is considered as one of multiple child hazardous work sector. Because children are still bodies and minds are still developing, the potential workplace hazards and risks can have tragic impact on their cognitive, physical and behavioral and emotional development.

To combat this problem, the Barack Obama administration attempted to regulate the import of these materials with the passing of the Dodd-Frank Act in 2010. This law obliged US companies to guarantee that the materials they use to manufacture their products do not come from conflict zones and are not used to finance potential guerrillas.

In early 2021, the EU began implementing a similar law to regulate conflict minerals, although this law does not include minerals such as coltan. To guarantee their materials do not come from conflict zones, companies follow a due diligence process based on the OECD guidelines for free-conflict minerals supply chain, which should ensure the traceability of those minerals.

However, as several efforts have been undertaken by major tech companies in sourcing of their materials (Apple and Google have committed substantial resources to developing processes for sourcing minerals from mines that benefit Congolese communities according to the 2017 report of the Enough project), according to Amnesty International and Global Witness 80%  of the companies failed to fulfill the minimum compliance of the law.

One of the main challenges for the correct implementation of this type of process is the traceability of the material in question from extraction to final sale, passing through intermediary sales processes and the refining of the minerals in question.

A large part of these minerals is extracted in DRC, sold in Rwanda as contraband, resold to companies located in China or Malaysia, and once the product is finished, they are sold in Western markets[2].

But as discouraging as the situation may seem, multiple private or public-private initiatives such as Fairphone, the Public-Private Alliance for Responsible Minerals Trade (PPA), the Responsible Artisanal Gold Solutions Forum (RSA) or the ITSCI programme, among others,  have been created in order to regulate the import of conflict minerals and to trace their origin.

Therefore, while the technology sector is expected to exponentially grow in the next 20 years due to the increasing IT innovation, the arrival of 5G, Artificial Intelligence (AI) innovation, robotics and telework (among others), particularly in the wake of the acceleration of this process as a result of COVID-19, the use of minerals associated with its production is also expected to increase.

In addition, these minerals also have other uses, with tungsten being used to produce x-ray screens or aircraft parts, tin, for soldering electronic products or to produce cans, and gold, for various luxury products.

Strong partnerships between public and private actors, as well as internal cooperation, to support the regularization of ASM, and to reinforce sourcing of conflict minerals, and sustainable and human-rights production are essential. As a matter of fact, GlobalCAD is currently collaborating with UNICEF regional office in Western in Central Africa to engage private sector partners, including in DRC, and promoting Corporate Social Responsibility in the region.