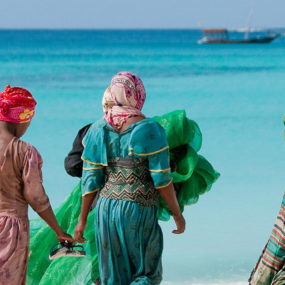 Equality between women and men, the elimination of any type of discrimination against women and the promotion of women’s rights are enshrined in a number of international conventions and commitments. Gender Equality is on itself one of the UN’s Sustainable Development Goals, but women’s empowerment is actually paramount if we aim to reach any sustainable and inclusive development targets.

While great progress has been made in the women’s and girls’ empowerment agenda, many gaps still remain. From presence in political office – women represent only 24% of national parliaments – to access to the labour market – in 18 countries, husbands can legally prevent their wives from working – to domestic violence – one in five girls experienced some kind of physical or sexual violence in the past 12 months – there is still a lot to be done, on many fronts.

As gender equality gains more space in the development agenda, we talked to Nina Retzlaff, consultant and partner at GlobalCAD, about how the issue has evolved and what is lacking to push the agenda even further, particularly in a development context.

1. Gender is one of Global CAD’s core areas of expertise. Could you summarise what kinds of projects we usually work on within this area?

Gender is usually a cross-cutting topic in our work. While we don’t focus so much on projects with a gender scope, women’s empowerment is a component of projects focused on other work areas such as green economy and climate change or private sector partnerships. For instance, we are working right now on a climate change evaluation in Costa Rica where gender is one of the aspects we need to take into account. It has been interesting to see how this has been more and more the case, both on projects commissioned by the public and by the private sector.

When we do work on a project specifically focused on gender, it tends to be focused on women’s social and economic empowerment – simply because this is more within the scope of our work.

2. Over the past 10 years working at GlobalCAD, how has the gender equality agenda evolved in the development context?

I would say that the Sustainable Development Goals (SDGs) have definitely made the issue more prominent. Since the SDGs, a gender perspective has become more requested by our clients and this aspect has been more integrated into projects of big donor organizations that we usually implement.

It has been very interesting to see how areas that typically would not include a gender perspective are incorporating it as a success indicator. For instance, we just had a project on a very technical area – coastal hazards – in which we had to integrate a gender study. This was not so much the case in the past.

3. Could you name one or a few projects that were very well implemented? What is really working?

We did one very interesting project with UN Women a few years ago. Obviously they are much more specialised on the topic but it was quite impressive to see how game changing it was. We were part of an evaluation project for an online platform called Empower Women. At first I thought an online platform couldn’t do much for gender equality, it just wouldn’t be able to bring that much change. But then the approach was not only to gather stakeholders around the platform but mostly to work with people on the ground all around the world to encourage young people to be “gender champions” in their own communities. It was a bottom up approach, so you could see the motivation of a lot of young women – and men – around the topic. It is a knowledge platform so it is used to share important information like regulations and policies, but also to share experiences, best practices and it really generates a lot of offline engagement and action.

4. You mentioned GlobalCAD’s scope of work is often focused on economic and social development. How can gender inclusive initiatives support economic activities, especially in developing countries?

Gender equality in a context of economic development has many different dimensions – it can have a huge impact on the national, the community and the family or the individual level. The idea behind promoting women’s economic empowerment is of course to give women a voice, to support them to be self reliant and independent. But it’s also to boost a country’s economic potential. Women account for 50% of the population, and in many countries they are restricted to household chores and don’t have access to the labor market. Basically half of the population is not participating in the job market. There is a huge untapped economic potential in those countries.

5. What is still lacking to push the agenda forward and really bring about change? What kinds of projects would you like to see more?

Unfortunately I feel that sometimes, and especially in projects that are not specifically focused on gender, but have it as an additional component, it is not so much about really making a change, but more about ticking a box. The issue is that there is often a lack of expertise installed in the institutions that work in more technical topics and they don’t really know how to effectively implement women empowerment initiatives.

I believe organisations would either have to do a lot of capacity building or integrate gender experts into their core team to be able to effectively implement policies and best practices on a daily basis. From a consultant point of view, I think it would be interesting to work more often in the stage that comes after the initial assessment and recommendations – I would like to be more involved in the implementation, which is where I see capacities are often lacking to make change happen.

Click here to download a pdf with more information about GlobalCAD’s approach to women’s empowerment and gender equality.