Turn on the light in the global village: challenges of journalism and sustainable development 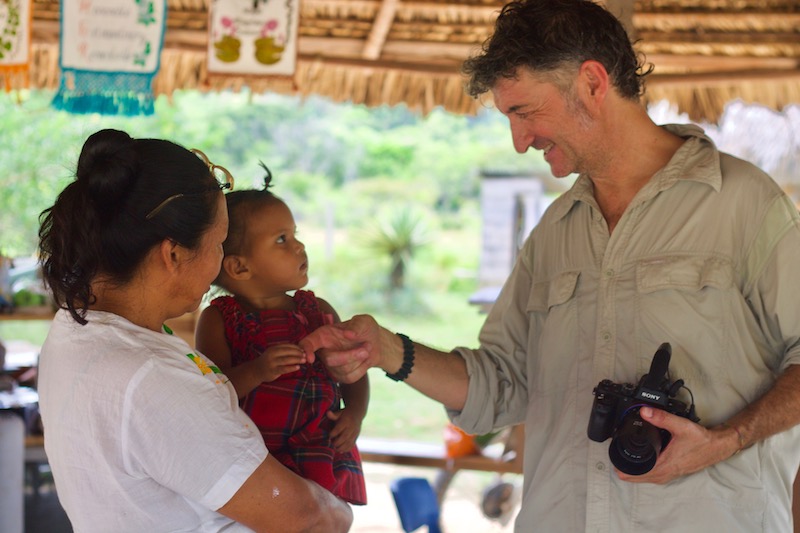 On the night of Friday, November 13, 2015, several million people added to their Facebook profile picture the filter of the French flag to show their repudiation of the terrorist attacks in Paris. However, few users seemed informed about an attack with a relatively higher balance in Lebanon occurred a few days later. The double standard to assess the seriousness of the news has been called the hierarchy of death and denounces the hypocritical criterion by which we estimate deaths in different parts of the world. 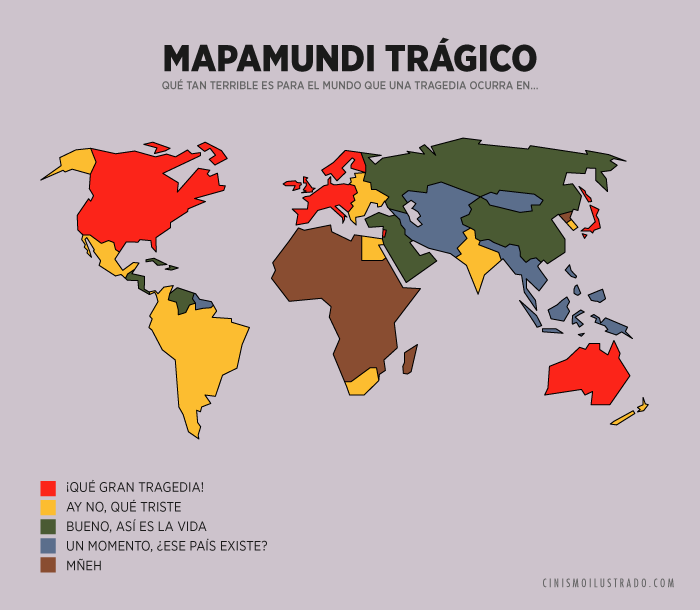 Journalism in a global world

Journalism students know well that the first phase of information processing is the evaluation of the newsworthy character of an event. All events are not newsworthy, that is, they do not deserve to be in the press. The criteria to define which news is published and which are not, are the “news values”.

Let’s review some of the traditional ones: novelty, unpredictability, future evolution of events, thr degree of importance and severity, geographical proximity and magnitude. These “news values” imply that the last game of Barca, a police investigation or an event that happened in the city where you live is more relevant oany otherer event occurring in an unfamiliar city for you, sometimes even if it has been “serious”.

However, is it possible to continue thinking about the criteria of proximity as they were understood in the 20th century?

In an increasingly global world, where every point of the planet is reachable in less than 24 hours, the experiences and referents of the younger generations are much more global than those of their parents.

The world’s problems, too. The refugee crisis is an example: The consequences of war, hunger and centuries of colonialism go beyond national barriers and settle in the land of everyone.

The solution passes through the capacity to create an ecosystem of communication (and communication means “dialogue”, not “telecommunications”) where we share codes and understand the values and conditions from which others speak to us.

Computer applications and social networking platforms are not enough to create bonds of union between citizens and cultures worldwide. We need to understand the problems and needs of others, our neighbours in the global village.

The journalism of fear

Traditional journalism often highlights the “event” that has a negative impact on the lives of its readers, in the unexpected one, which breaks order and stability. Television, thirsty for images, is particularly interested in the coverage of risks linked to disasters and events that generate visual impact. For example, chemical discharges cause fewer deaths than tobacco or the use of asbestos and, nevertheless, receive much greater coverage in that media.

The information we consume is framed by the concept of risk, as explained by Ulrich Beck. The discourse of risk provides a logic of social functioning linked to the detection of dangers and the provision of strategies to fight it.

Apparently, we are also neurologically wired to deal with threats and conflict. In that sense, the news that poses a serious and clear threat and a need for an urgent response, are what usually attract the attention of the vast majority. 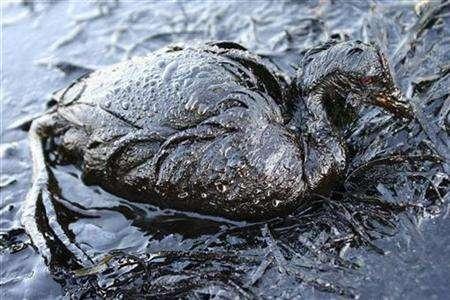 The news about oil spills usually have great coverage and media attention. This image by REUTERS / Pavel Shevtsov illustrates the dumping of 500 tons of oil in the Dulov River , Russia. Source: REUTERS

The editor of the Daily Telegraph, Tony Gallagher, says “If we were to provide readers with a diet of [positive news], they would soon discover that it is a boring place to live. Our news desk will see up to 2,000 stories per day, less than 100 will enter the mailbox and, by their nature, will be extraordinary.

The news is harsh, it is grim, it is exciting, [the readers] want to be surprised by what they are reading ” [1]. Another senior editor of a newspaper said: “Acid rain, hazardous waste … are those great bureaucratic stories that make people leave a little lost. There is no clear solution, there is no clear impact. They are not sexy. ” [2]

In summary, it can be said that the media usually pursue events (negative, close) to string together their stories centred on “here and now” problems, with a given subject, instead of more complex processes where there is no single triggering agent or solution.

“The syndrome of the boiled frog” 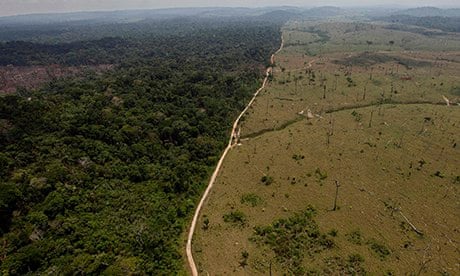 The enormous impact of deforestation, as a gradual process and caused by various causes, is difficult to illustrate through images and headlines. (“Satellite analysis reveals that since 2000 an area equal to 50 football pitches has been destroyed every minute since 2000”). Source: The Guardian

The fact that the attention of the public “poses” in what is familiar or threatening puts us in the situation of “the frog that did not know it was cooked”. The parable is the best illustration that the problems that progress gradually and without a warning signal are the most serious ones. Like climate change, the loss of biodiversity, hunger, AIDS, deforestation, the rise of hate speech. These are not unknown problems, but in the absence of an “out of the ordinary” manifestation, they are insufficiently talked about: there is no building to address, there is no demonstration to organize or homicide to follow up…

The Sustainable Development Goals are a great step in the establishment of global goals to fight against the main scourges of the world. They are based on the confidence that collaboration and international commitment are capable of proposing transformation strategies on a global scale. But “without confidence we cannot face the complex challenges of our planet”, as the Secretary-General of the United Nations António Guterres has said. Building this trust requires an informed and aware citizenship about the problems that affect them beyond their immediate surroundings.

In order to meet the need to accompany development efforts, some media are beginning to welcome sections or specialized media focusing to the issue of global human development. These media raise issues to which classic journalism does not respond, caught in the classic criteria of newsworthiness.

Journalism focused on global development is transversal: it requires narrating, contextualizing and analyzing scientific, social, political, cultural, environmental and ethical aspects. It has the challenge of generating new agendas, but also new “frameworks” of attention and understanding of information, appealing to a world citizen, responsible, capable of going beyond the speeches of fear and passive attention patterns.

Two examples are the Global Development section of The Guardian and the Planeta Futuro magazine of  El País. Both media have been launched with initial financial support from the Bill and Melinda Gates Foundation with a total guarantee of independence and the commitment to seek alternative financing after the first four years.

In both cases, the challenges related to gender, hunger, childhood, illness, nutrition, contamination, among many other key issues for global development, are covered. Often, coverage is based on collaboration with development agencies working in the field to obtain attractive approaches and visualize stories of social transformation. In this way, Planeta Futuro has created agreements with FAO, WHO and the IDB, among other organizations, in order to offer systematic information, from a human and well-documented approach to the main development challenges.

No need to resort to devastating images to informing about development. In fact, they sometimes fail to illustrate problems that are complex. The opportunities offered by digital tools allow generating attractive graphs from data and information analysis, such as infographics and animations. Likewise, illustrations are used to highlight gaps or other problems. 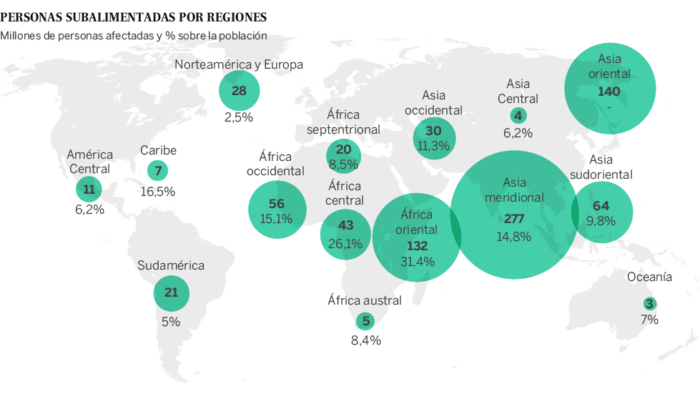 Another strategy to inform this type of issues is the creation of visual metaphors: “the ecological footprint” is an example of a metaphor already positioned that is very useful to think about a phenomenon that may be difficult to understand for the common public.

Also, the success of this type of journalism goes to illustrate abstract concepts such as “resilience”: “Think of an earthquake. Depending on how strong a house is, it will endure or collapse. We cannot change the intensity of the earthquake, but the strength of the housing’. Stamoulis explains that the same must be done with people: prepare them for the worst “(El País, Planeta Futuro). Or explain the consequences of climate change: “The first country that can swallow the sea by climate change” ( Planeta Futuro ).

The use of analogies with more visual processes is interesting when explaining complex phenomena and allowing the reader to ponder the gravity of gradual phenomena, not linked to a specific event. “Safe toilets help flush out disease in Cambodia’s floating communities” (The Guardian)

Refer to the results of studies, the occasion of international days or conferences are other strategies to bring the issues sensitive to development to the public agenda. “A promise on Paris agreement emerges as world ‘wavers’ on climate action” (The Guardian).

Telling stories from another perspective is not a kind of illuminated or alternative journalism exactly; it is simply about making new stories, themes and approaches in a quality narrative. The reports of the global development section of The Guardian have been nominated for the One World Media awards and Planeta Futuro has received the SERES award, the European Investigative Journalism Award and the Accenture Award for journalism in innovation, the latter for the report 23 inventions that can improve the lives of millions of people , among many others.

Journalism that turns on the light

They are difficult times for journalism because the challenge that has served the world is not easy: to inform and create understanding in the Tower of Babel, where we all speak a different language and have a different angle to the problems of the world.

Ryszard Kapuscinski said that “the work of journalists is not to step on cockroaches, but to turn on the light so that people see how the cockroaches run to hide.” Today, that light needs to reach the places on the planet where the great dilemmas are occurring and also the great solutions of our time.

The problem of development today is not only an ethical imperative but a vital one. We can only achieve sustainable development if we achieve a global project based on the understanding of difference, empathy towards the needs of others and the necessary articulation to drive change.

[1] “If we were to provide the readers with a diet of [positive news], then they would soon discover that’s a rather boring place to live. Our news desk will see anything up to 2,000 stories a day, fewer than 100 will get into the Mail and by their nature, they will be extraordinary. The news is gritty, it’s gloomy, it’s exciting, [readers] want to be surprised by what they are reading. “Source: Becket (2015): Beyoncé, cute kittens or relentless tragedy? Is good news really news at all? https://www.theguardian.com/media/2015/feb/01/beyone-cute-kitten-tragedy-news