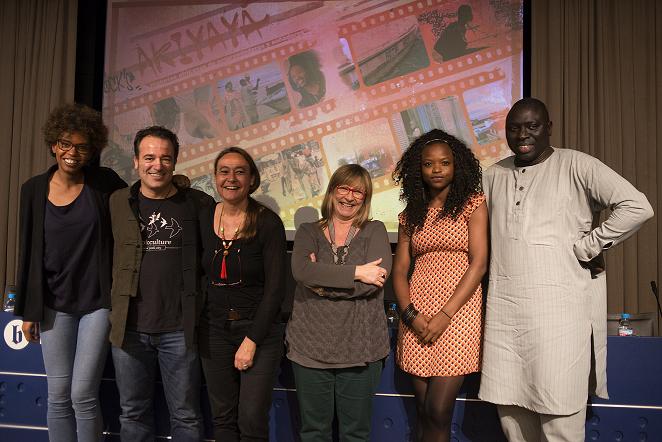 CAD Productions premiered yesterday, April 8th in Barcelona “Akiyayá, African stories of dreamers and entrepreneurs”, a film that narrates the stories of young African entrepreneurs living between Europe and Africa, offering a critical and lucid look at the myths, beliefs and preconceptions that feed prejudices and dreams on both sides.

Around 200 people attended the documentary’s premiere, which took place at the School of Communication and International Affairs Blanquerna. The film’s screening was followed by the roundtable “Thoughts on inmigration policies: beyond the fences”, moderated by the photojournalist Sandra Balsells. The film’s director, Fernando Casado Cañeque as well as some of the lead actors, discussed around the clichés feeding the false stereotypes both in Africa and in Europe.

“The message coming on either side is stereotyped, false and victimized,” says the Centre d’Estudis Africans director and anthropologist, Lola López. “When we are told Africans come to Europe to jump the fence, we are being shown an image of despair, misery and hunger, instead of describing how these young Africans are adventurous, and eager to know, to consider new challenges. The media do not tell us that the desperate and hungry ones do not get here”, she concludes.

It is precisely this kind of false stereotypes what the documentary tries to fight. “There has been too much African sadness filmed” says the documentary’s director, Fernando Casado Cañeque, for whom “positive thinking is a necessity.” “That’s why we are dedicated to filming constructive stories.“

For ‘Mahu’, Senegalese, teacher, poet, translator and one of the film’s leading roles, it is crucial this message reaches Africa and especially “all those countries from which people are migrating towards Europe, so that they see the reality here.” The same thing goes for Europeans regarding Africa, he claims.”We do not really know how life is lived on ‘the other side’, we only get clichés.”

Tania Safura, Mozambican, cultural manager and one of the film members believes that one way to end with these clichés widely spreaded by the media, is through social documentary. In Akiyayá, “we have seen a Senegalese businessman, in bed, having breakfast with his family; that also exists in Africa. ¡People wear shirts!” kids Bella Agossou, actress and blogger from Benin, and other of the human stories from the documentary. For her, the hardest part of the emigration process is “to go back to Africa and explain the reality here.” Tell her family and friends that “money does not grow on trees.”

Akiyayá tries, in short, to showcase another picture of emigration, to break Europe’s idealized stereotypes, and the negative cliches coming from the African continent, through the “stories of unsung heroes who are transforming the continent day by day”, and that, according to the director of the documentary, “inspire us all through their joy and fighting spirit.”

During the presentation the documentary’s premiere was announced in Senegal, during the month of May. Akiyayá will be also presented in Madrid, Berlin, Brussels, Cuba and Washington DC, soon.